Did you know that even Vincent van Gogh was an aquarellista in his early days!
Everyone knows him from his poetic yet tortured impressions in oil - but in his early period he worked in watercolours!
The Van Gogh Museum in Amsterdam just added this one to their collection: 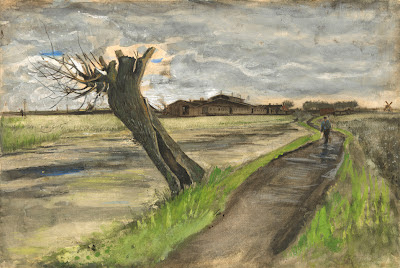 It is from 1882, he was 29 years old and still working hard on getting the perspective right. At the time he was mostly working in black and white sketches. I personally think is it quite muddy - but you probably have to take into account that it is painted in Holland, where the skies are grey. And the light, around the willow and in the sky, with the blue patches, is very good. Enlarge the picture by clicking it. It seems that Vincent was happy with it:
He wrote about it in a letter to his brother Theo and that letter is now displayed next to the aquarelle in the museum. He writes that he thinks this is one of the best of a series of watercolours he painted that summer... 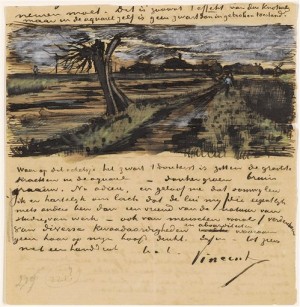 I tried to find more watercolours by van Gogh on the internet but gave up as hundreds of watercolours by amateurs 'after van Gogh' showed up. Some were very well done - good for you guys! Keep working on those aquarelles! Below one that seemed authentic to me, great strong colours,  most certainly done in watercolours (with cauliflowers to prove that) and I guess ink for the outlines and the masts: 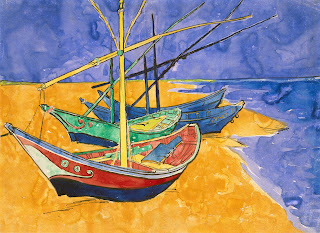 your remarks and observations to a post are most welcome! Please start typing here :)

Receive an email with every new blogpost: